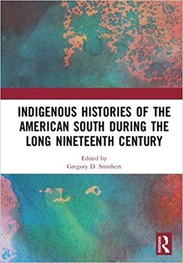 Native Southerners lived in vibrant societies, rich in tradition and cultural sophistication, for thousands of years before the arrival of European colonization in the sixteenth and seventeenth centuries. Over the ensuing centuries, Native Southerners adapted to the presence of Europeans, endeavouring to incorporate them into their social, cultural, and economic structures. However, by the end of the American Revolutionary War, Indigenous communities in the American South found themselves fighting for their survival. This collection chronicles those fights, revealing how Native Southerners grappled with colonial legal and political pressure; discussing how Indigenous leaders navigated the politics of forced removal; and showing the enduring strength of Native Americans who evaded removal and remained in the South to rebuild communities during the latter half of the nineteenth century. This book was originally published as a special issue of American Nineteenth Century History. 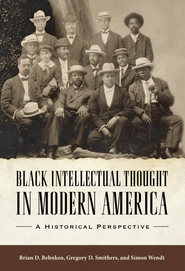 
Reviews
"In this timely new collection, editors Brian D. Behnken, Gregory D. Smithers, and Simon Wendt have assembled a group of stellar essays that highlight the range and complexities of black intellectual thought in the United States. Drawing insights from several academic fields of inquiry including critical race theory and feminist theory, this volume is a necessary text for anyone   I  interested in understanding black intellectual history."
— Keisha N. Blain, University of Pittsburgh 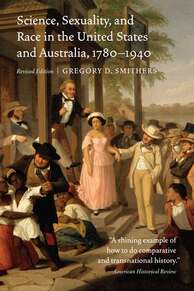 Science, Sexuality, and Race in the United States and Australia, 1780–1940, Revised Edition is a sociohistorical tour de force that examines the entwined formation of racial theory and sexual constructs within settler colonialism in the United States and Australia from the Age of Revolution to the Great Depression. Gregory D. Smithers historicizes the dissemination and application of scientific and social-scientific ideas within the process of nation building in two countries with large Indigenous populations and shows how intellectual constructs of race and sexuality were mobilized to subdue Aboriginal peoples.

Building on the comparative settler-colonial and imperial histories that appeared after the book’s original publication, this completely revised edition includes two new chapters. In this singular contribution to the study of transnational and comparative settler colonialism, Smithers expands on recent scholarship to illuminate both the subject of the scientific study of race and sexuality and the national and interrelated histories of the United States and Australia
Reviews
​“A shining example of how to do comparative and transnational history.” — Katherine Ellinghaus, University of Melbourne

“[Gregory D. Smithers] combines a very ambitious synthesis of existing scholarship with original research into primary sources. This book could have a profound impact upon scholarly thinking in relevant fields.”--Ann McGrath, author of Illicit Love: Interracial Sex and Marriage in the United States and Australia


“A keen critique of the impossible logic of racism in two major settler societies anxious to strengthen their sense of nationhood. . . . Readers will be fully convinced of the key importance of whiteness in both these societies, and of the science that bolstered it.”--Philippa Levine, author of The British Empire: Sunrise to Sunset 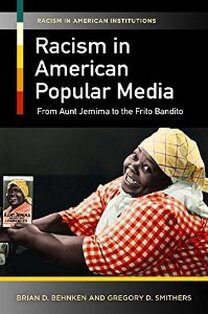 Were there damaging racist depictions in Gone with the Wind and children's cartoons such as Tom and Jerry and Mickey Mouse? How did widely known stereotypes of the Latin lover, the lazy Latino, the noble savage and the violent warrior American Indian, and the Asian as either a martial artist or immoral and tricky come about? This book utilizes an ethnic and racial comparative approach to examine the racism evidenced in multiple forms of popular media, enabling readers to apply their critical thinking skills to compare and analyze stereotypes, grasp the often-subtle sources of racism in the everyday world around us, and understand how racism in the media was used to unite white Americans     and exclude ethnic people from the body politic of the United States.
Authors Brian D. Behnken and Gregory D. Smithers examine the popular media from the late 19th century through the 20th century to the early 21st century. This broad coverage enables readers to see how depictions of people of color, such as Aunt Jemima, have been consistently stereotyped back to the 1880s and to grasp how those depictions have changed over time. The book's chapters explore racism in the popular fiction, advertising, motion pictures, and cartoons of the United States, and examine the multiple groups affected by this racism, including African Americans, Latino/as, Asian Americans, and American Indians. Attention is also paid to the efforts of minorities—particularly civil rights activists—in challenging and combating racism in the popular media.﻿​​ 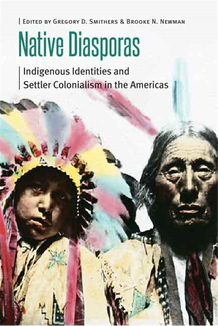 The arrival of European settlers in the Americas disrupted indigenous lifeways, and the effects of colonialism shattered Native communities. Forced migration and human trafficking created a diaspora of cultures, languages, and people. Gregory D. Smithers and Brooke N. Newman have gathered the work of leading scholars, including Bill Anthes, Duane Champagne, Daniel Cobb, Donald Fixico, and Joy Porter, among others, in examining an expansive range of Native peoples and the extent of their influences through reaggregation. These diverse and wide-ranging essays uncover indigenous understandings of self-identification, community, and culture through the speeches, cultural products, intimate relations, and political and legal practices of Native peoples.

Native Diasporas explores how indigenous peoples forged a sense of identity and community amid the changes wrought by European colonialism in the Caribbean, the Pacific Islands, and the mainland Americas from the seventeenth through the twentieth century. Broad in scope and groundbreaking in the topics it explores, this volume presents fresh insights from scholars devoted to understanding Native American identity in meaningful and methodologically innovative ways.
Praise for Native Diasporas:

“In a powerful and timely way, Native Diasporas moves away from the ‘frontier’ as finite and     from the ‘middle ground’ as an endpoint. Its essays pay attention to women’s agency, gender issues, economic and political dynamics, the history of changing policies, and to Indigenous responses and engagements with settler colonialism.”--Ann McGrath, director of the Australian Centre for Indigenous History at Australian National University and coauthor of How to Write History that People Want to Read

"This work will become a seminal text for people studying in the field."--Paul Moon, Te Kaharoa 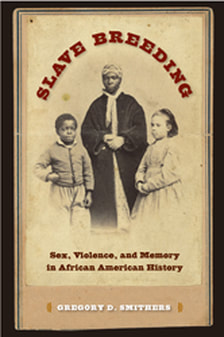 For over two centuries, the topic of slave breeding has occupied a controversial place in the master narrative of American history. From nineteenth-century abolitionists to twentieth-century filmmakers and artists, Americans have debated whether slave owners deliberately and coercively manipulated the sexual practices and marital status of enslaved African Americans to reproduce new generations of slaves for profit.

In this bold and provocative book, historian Gregory Smithers investigates how African Americans have narrated, remembered, and represented slave-breeding practices. He argues that while social and economic historians have downplayed the significance of slave breeding, African Americans have refused to forget the violence and sexual coercion associated with the plantation South. By placing African American histories and memories of slave breeding within the larger context of America’s history of racial and gender discrimination, Smithers sheds much-needed light on African American collective memory, racialized perceptions of fragile black families, and the long history of racially motivated violence against men, women, and children of color.

See my discussion of ​Slave Breeding on the Philippe Matthews Show

Awards
Honorable mention, Deep South Book Prize, 2014, Summersell Center for the  Study of the South    ​
Praise for Slave Breeding:
“As engaging as it is compelling, bold, and captivating, Smithers’s Slave Breeding pulls the reader through its pages with heart-wrenching exposition of the dark and ugly chapter of what could rightly be characterized as the sexual zeitgeist of American national history.”--TUNDE ADELEKE

"Underscores the broad meaning of the continuing debates over sexual violence during and after slavery, the centrality of the African American family, and white hypocrisy." CHOICE

"A thought-provoking piece of scholarship that sheds light on the complex history of slave breeding in America. Smithers's book will be hotly debated in the profession." MICHAEL L. ONDAATJE

"Slave Breeding makes a powerful case not just to reexamine sexual exploitation under slavery and the power of memory as an historical tool but also to interrogate accepted historical narratives." Journal of American History Vol. 100, no. 3 (2013)

“Boldly and persuasively challenges received wisdom about the American narrative during the last two centuries.” Journal of Interdisciplinary History Vol. 44, no. 2 (2013) 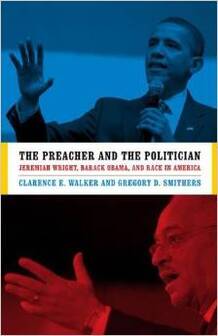 Barack Obama’s inauguration as the first African American president of the United States has caused many commentators to conclude that America has entered a postracial age.  The Preacher and the Politician argues otherwise, reminding us that, far from inevitable, Obama’s nomination was nearly derailed by his relationship with Jeremiah Wright, the outspoken former pastor of Trinity United Church of Christ on the South Side of Chicago. The media storm surrounding Wright’s sermons, the historians Clarence E. Walker and Gregory D. Smithers suggest, reveals that America’s fraught racial past is very much with us, only slightly less obvious.

With meticulous research and insightful analysis, Walker and Smithers take us back to the Democratic primary season of 2008, viewing the controversy surrounding Wright in the context of enduring religious, political, and racial dynamics in American history. In the process they expose how the persistence of institutional racism, and racial stereotypes, became a significant hurdle for Obama in his quest for the presidency.

The authors situate Wright's preaching in African American religious traditions dating back to the eighteenth century, but they also place his sermons in a broader prophetic strain of Protestantism that transcends racial categories. This latter connection was consistently missed or ignored by pundits on the right and the left who sought to paint the story in simplistic, and racially defined, terms. Obama’s connection with Wright gave rise to criticism that, according to Walker and Smithers, sits squarely in the American political tradition, where certain words are meant to incite racial fear, in the case of Obama with charges that the candidate was unpatriotic, a Marxist, a Black Nationalist, or a Muslim.

Once Obama became the Democratic nominee, the day of his election still saw ballot measures rejecting affirmative action and undermining the civil rights of other groups. The Preacher and the Politician is a concise and timely study that reminds us of the need to continue to confront the legacy of racism even as we celebrate advances in racial equality and opportunity.
Praise for The Preacher & the Politician:
The Preacher and the Politician is a timely and provocative book. Clearly written in accessible language, it offers general readers and specialists alike a means to understand the context of the 2008 election and the pervasive complexities of America's legacy of race and racism.
Wallace Best, Princeton University